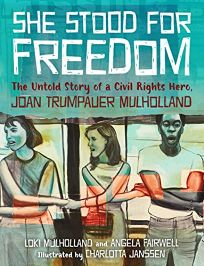 Joan Trumpauer Mulholland grew up in Virginia in the 1950s and witnessed the injustice of segregation firsthand. As a teenager, she joined the Civil Rights Movement, attending demonstrations and sit-ins. Because of her passionate belief in the cause, she was involved in several important and historically significant events, including: The Freedom Rides of 1961 The Woolworth’s lunch counter sit-ins in Jackson, Mississippi, in 1963 The March on Washington with Dr.