As one of the fifteen contributing coaches to HOW TO COACH GIRLS, Ainslee Lamb is an All-Canadian Field Hockey Player who has coached women’s field hockey as head coach at Yale and Boston College. Currently,  she is focusing coaching on middle school female athletes and bringing them into the sport of field hockey. As a veteran coach, she shares The One Question Coaches Should Ask Girls. 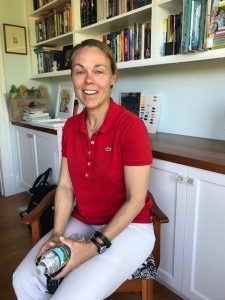 One of the first questions that I ask all the teams and individual athletes I work with are: “What are we doing well?” I don’t know if I ever asked the athletes that I worked with at Yale or Boston College this question. The emphasis was on what do we need to work on, what do we have to fix, why are we not winning the game right now. More the doubting questions versus instilling these athletes to focus on what they are doing well. Feeding them with what they are doing well ironically takes care of the things that are not happening on the field because they go back with such confidence on what they are doing well and they focus on those strengths instead of things that not allowing them to win the game.

I love that now. It’s the first question that I ask. My rule with my daughter is that she has to tell me three things she does well before I will have a conversation about things that we can do better. I think it’s really important that they feel confident about what they are doing, but girls need to learn to say things that they do well. Ironically, we sometimes are so critical and always expecting more of ourselves that even in individual meetings with the Boston College athletes and you ask the girls what are your strengths. They would answer, “I can’t really think of one.” And yet these young women are some of the best players in the country. I really like to instill in young women don’t be afraid to say something you are good at. The getting better and improvement conversations are then easier to have.

On coaching her daughter Brooklyn:

What Ainslee Lamb says about HOW TO COACH GIRLS:

It is refreshing to read HOW TO COACH GIRLS that recognizes and embraces the unique aspect of coaching female athletes. A guide for coaches of all sports to facilitate the incredible responsibility and privilege we have to work with the future female leaders through the wonderful gift of sport. To finally articulate the sentiments of many successful female sports team coaches, and identify the techniques and approaches that will contribute to the potential success of the girls both on and off the fields.

To demonstrate to all of us that adjusting our approach, focus or style of communication is no longer a compromise but the sign of a great coach that only wants to catapult these girls to be confident, capable and proud young women today! HOW TO COACH GIRLS gives us tangible ideas, practice plans and thought-provoking chapters to help us do exactly that!

Ainslee Lamb was the head coach of the Yale University field hockey team from 1999 to 2003. In 2005, she became head coach of Boston College, where she coached for 10 years. Under her lead, the Eagles recorded a winning record and have received many accolades. At the end of the 2014–15 season, Lamb resigned her position as head coach. She is currently coaching Natick Middle School girls field hockey as well as coaching various national teams for the USA Field Hockey program including U17, U19, and U21.

A 1994 graduate of the University of Toronto, Lamb was a three-year field hockey letter winner, helped lead the team to a national championship in 1988 and earned All-Canadian honors three times. Prior to college, Lamb was a member of both the 1990 World Cup team and Canadian National team from 1987-92, where she competed in the Junior World Cup, the Olympic qualifying tournament and two Four Nation Tournaments.

Did you know that 70% of all kids quit organized sports by the age of 13, with girls quitting at 6x the rate of boys?

Alison Foley, former Boston College’s Women’s Head Soccer Coach and current CEO of Foley Athletic Advising, and Mia Wenjen, parenting blogger at PragmaticMom.com, help coaches — both parent volunteer and professional — crack the code of how to keep girls in sports. As a mother of two daughters who played a lot of sports, Mia provides personal accounts to illustrate issues discussed throughout the book. Alison, also a mother of a young female athlete, has hands-on advice from coaching young women professionally for more than two decades.

Volunteer parents and experienced coaches alike will find invaluable advice on creating a successful team that motivates girls to stay in sports beyond the middle school years. Twenty-two chapters cover major issues, including how to pick captains, the importance of growth mindset, issues around body image and puberty, as well as the challenges of coaching your own daughter.

In addition, fifteen professional coaches from a range of sports, including former Olympian athletes, give their advice on what girls need from a coach to allow them to flourish in sports, and most importantly, have fun. This is a hands-on manual to help coaches keep girls in sports! Go HERE to read more about this much-needed resource for parents and coaches.

Connect with Audrey Press on Social Media
An Interview with Boxing Trainer for the U.S. Olympic Team, Marc Gargaro #HowToCoachGirls
Move : A writer’s sage advice for gaining momentum on a Daily Writing Practice