“I’m in the garden!” The Secret Garden to be precise. 🙂

This time of year in the Secret Garden, the earth is sleeping under a cloak of beautiful white snow. The birds have migrated off leaving the garden quiet from birdsong. This is the time of year when we clean up the garden when snow and rains allow. In the not too distant future, our garden will be exploding with life once again.

I thought we’d spend these last few weeks of winter together enjoying a few moments inside our book A Year in the Secret Garden. Marilyn Scott-Waters and I had more fun than two women should creating this activity guide to one of our favorite childhood books The Secret Garden.

One of the things I love most about The Secret Garden is that together, Mary, Colin, and Dickon hold the key to unlocking the natural world. Through their struggles, triumphs, and adventures they unlock the wonders of nature and magic to us too.

One of our tasty treats in A Year in the Secret Garden is Porridge with Treacle. I’m sure all of you are asking, “what’s that ?” I thought today we’d take a closer look at porridge, in fact, we’ll just have ourselves a little Porridge Fest 2021. What do you say?

So, What is Porridge?

Porridge is a dish made by boiling ground, crushed, or chopped cereal in water, milk, or both, with optional flavorings such as sugar, cinnamon, nuts, raisins, which is usually served hot in a bowl or dish.

Have you ever noticed that in most of our favorite children’s classic stories that they are always serving porridge or its bad version equivalent gruel? There’s probably a good reason for that. Many of our favorite books are set in England or Great Britain. Northern Europe including Scandinavia has been eating porridge for centuries. I love the oat porridge of England and Scotland. My parents being from Sweden meant I ate a rice sort of porridge known as groat. Porridge can be made from any type of grain and is so very good and tasty.

According to the Daily Telegraph, porridge transformed mankind.

Porridge is a hearty meal that can be modified to either a sweet dish or a savory dish depending on how seasonings are being added. Over the past couple hundred years, porridge is eaten as a breakfast meal, and let’s one stay full most of the day. In the story The Secret Garden, people ate two meals a day: porridge in the morning and then again at supper at night. It was only the upper classes that would have more than two meals a day.

In other literary favorites such as Oliver Twist, “each boy had one porringer, and no more – except on occasions of great public rejoicing” – has been viewed as a watery symbol of deprivation. The watery-deprived version of porridge is known as gruel. The Roman armies as they occupied Great Britain were fed “water-grule.” Later various prison systems in Great Britain would serve their prisoners water-gruel and the term “doing gruel or doing porridge” became a term for being in prison.

Let’s look back a little bit into history and really see where the story of porridge leads us.

In those old days, they cooked in the kitchen with a big kettle that always hung over the fire. Every day they lit the fire and added things to the pot. They ate mostly vegetables and did not get much meat. They would eat the stew for dinner, leaving leftovers in the pot to get cold overnight and then start over the next day. Sometimes the stew had food in it that had been there for quite a while hence the rhyme, “Peas porridge hot, pea’s porridge cold, peas porridge in the pot nine days old.”

In peasant cottages, there was no kitchen to cook in. The poorest families had only one room where they cooked, ate, worked, and slept. It is also possible that most of these extremely poor families owned only one kettle. Poor town-dwellers usually didn’t even have that, and obtained most of their meals ready-made from shops and street vendors in the Medieval version of “fast-food.”

Those who lived on the edge of starvation had to make use of every edible item they could find, and just about everything could go into the pot (often a footed kettle that rested in the fire rather than over it) for the evening meal. This included beans, grains, vegetables, and sometimes meat — often bacon. Using a little meat in this manner would make it go farther as sustenance.

To really understand porridge we really must go to Scotland. Porridge or Parritch is one of the national dishes of Scotland.

Traditions surround the making and eating of porridge. Stirring should always be done clockwise (for luck) with a spirtle or the evil, a wooden stick tapering to a rounded point, for stirring, and a carved head. In Scots, porridge was always referred to in the plural and was customarily eaten while standing, but the reasons for this latter custom aren’t really known. Some think it was due to the proverb: “A staunin’ sack fills the fu’est” (A standing sack fills the fullest), while others thought people ate standing up in case of a surprise enemy attack.

Once cooked, the porridge is ladled into porringers (bowls) with a separate bowl of milk, buttermilk, or thin cream close by. Each spoonful of porridge was dipped into the cold liquid and then eaten. Some sprinkled sugar over the porridge, and others preferred honey, treacle, or syrup, or a small square of butter. Porridge was sometimes poured into a drawer in the kitchen dresser to be sliced when cold, either for eating out in the fields or for reheating in the evening.

Porridge for your Health

Porridge is highly nutritious because oatmeal contains protein, carbohydrates, fats, and soluble fiber, all the B vitamins, vitamin E, calcium, and iron. For the very poor in Great Britain, porridge prevented scurvy and other ailments from the lack of vitamins A, C, and D when one added to milk and vegetables to the porridge. 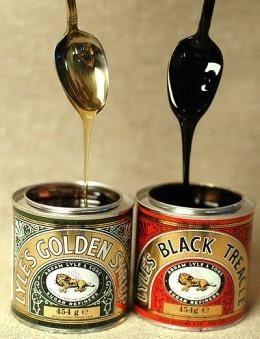 So now we get to the sweet stuff. For those of us who live in the United States, treacle will be a mystery but I’m hoping to end that for you right now. For those of you who live in Great Britain or the Commonwealth, I imagine treacle has found a way to your heart, stomach, and table.

Treacle is what we call molasses here in the States. Treacle is any uncrystallized syrup made during the refining of sugar. The most common forms of treacle are the pale syrup known as golden syrup and the darker syrup usually referred to as dark or black treacle. Dark treacle has a distinctively strong, slightly bitter flavor, and richer color than golden syrup, yet not as dark as molasses. Golden syrup is the main sweetener in treacle tart.

For those of you who are Harry Potter fans, Treacle Tart and Treacle Pudding were among Harry’s favorite foods.

Molasses has a stronger and more robust taste than treacle. In the US molasses are found in bottles in the baking section of your grocery store and treacle can be found in cans/tins in grocery stores in Great Britain.

Inside the pages of A Year in the Secret Garden, you will find a delicious recipe for porridge and treacle. 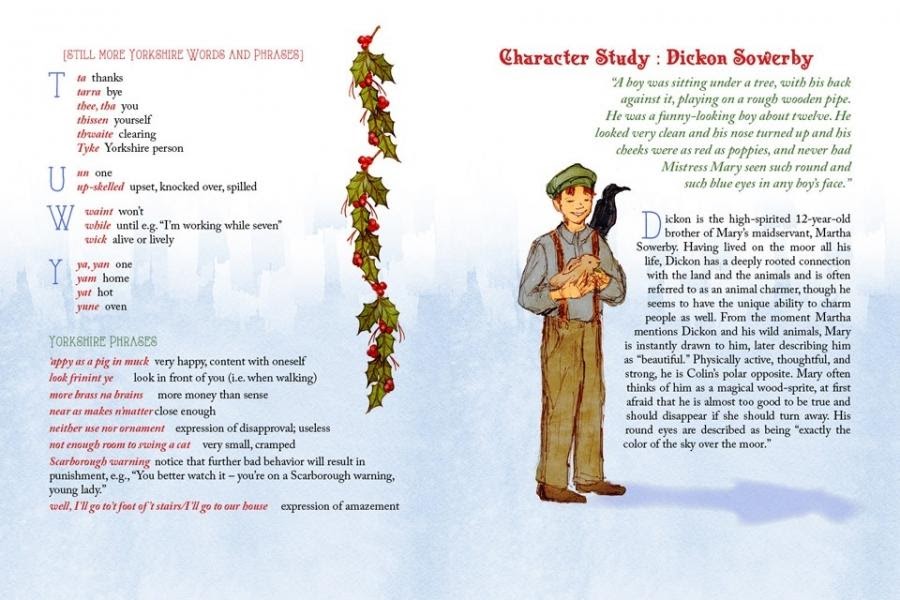 I hope you’ve enjoyed our porridge fest today and a closer look into this hearty and tasteful meal.

A Year in the Secret Garden 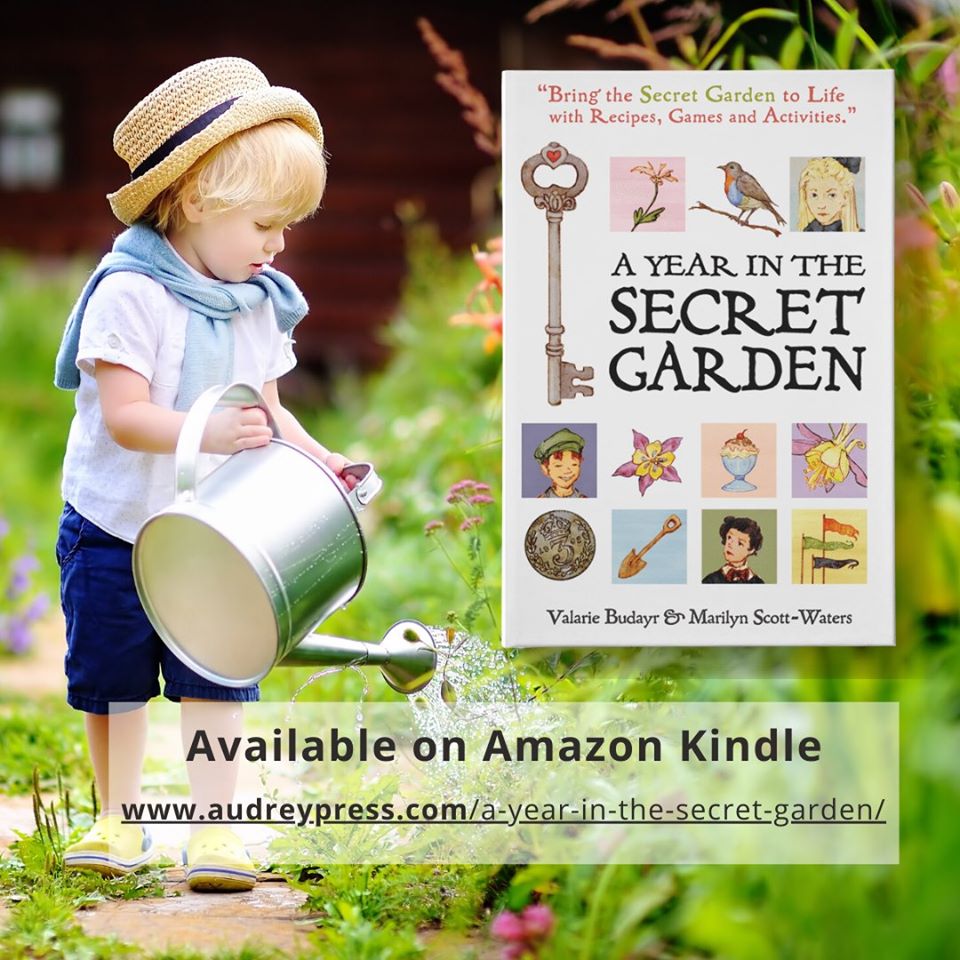 As parents, we want/need quality books with extension activities to help our young ones unplug and create memories. Pulling books from shelves, and stories from pages is also an important act that will the habit of being life-long readers. Quality books with companion book extension activities are not only working to create special family time, but it also allows kids to solve the world’s problems without major consequences. A Year in the Secret Garden is just such a book.

This delightful children’s book that is co-written by Marilyn Scott-Waters and Valarie Budyar and it offers original month-by-month activities that allow readers to delve deeper into the classic children’s tale, The Secret Garden.

Within the 120 pages (with 150 original color illustrations and 48 activities)families will find many activities inspired by The Secret Garden that encourages them to step away from technology and enjoy getting hands and feet into the black earth of a family garden. This book will make a great gift and be the catalyst for many hours of family growth, learning, and FUN!

Grab your copy ASAP and “meet me in the garden!” More details HERE!